I know she likes red and flowers so that is where I started. I used the Prized Peony Bundle to make three  peonies out of Real Red cardstock. Before I assembled the peonies, I sponged some Whisper White craft ink onto the edges of the petals to soften the appearance of the flowers. I cut the center out of  So Saffron cardstock and stuck them in to the center of the flowers. 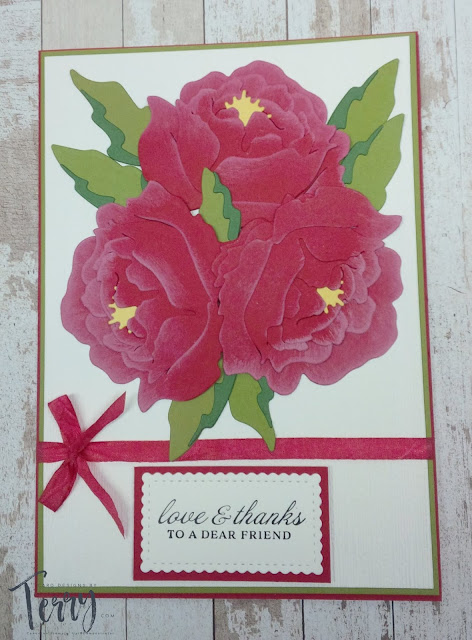 To create the card, I started with a Real Red card base. I made a larger card again (5 X 7 inches) so that there would be lots of room for Shirley to write a special message to Mary. I wanted the flowers to go on a Whisper White mat but needed something between that and the card base so I decided on Old Olive. Before I attached the peonies to the Whisper White cardstock, I embossed it using the Subtle embossing folder. Since I made a larger card, I had to run the cardstock through twice to get the whole piece embossed. There was a slight line where the two met but I purposely made it towards the bottom of the cardstock because I knew I was going to put a ribbon there. It hides the line perfectly.

I cut the leaves out of Old Olive and Garden Green cardstock and adhered them together. I placed the three peonies at the top portion of the card and added the leaves under the flowers where I felt they looked nice. I added this piece of cardstock onto an Old Olive mat and wrapped my ribbon around it where the embossing line was. The ribbon I used was the Crinkle white seam binding that I coloured with my Real Red Dark Stampin' Blend. I love how it is so close to the true colour and it dried almost immediately. I also tied a second piece around this piece of ribbon and tied it into a bow. I added this card front to my Real Red card base using many dimensionals.

I stamped the sentiment from the Prized Peony stamp set using Jet Black Stazon ink onto a small piece of Whisper White cardstock. I then cut it out using a die from the Stitched so Sweetly set. I matted this onto a piece of Real Red cardstock and added it to the card front using dimensionals.

Note: after I prepared this blog post to be ready for posting Shirley passed away. She passed on Tuesday afternoon. My plan was to go visit her on Wednesday but that obviously didn't happen. We had a good visit last week when I saw her but she was much more tired than the previous time I visited. I know she is at peace and is no longer in pain. Be free Shirley!

Thanks so much for stopping by today! I hope you enjoyed this card. Maybe make a card for a friend as a thank you or give one to another friend to pass on to thank another friend. A homemade card can say so much more than you know.