In case you were wondering if I am keeping on top of my Paper Pumpkin kits, I am! I put a suspend on last month's kit as I didn't think it was one that I could do much with and with the wedding and everything else going on in my world, I knew I wouldn't have had time to do it. That is another great thing with Paper Pumpkin. If you don't think you will do a kit or you know you will be too busy, you can just suspend a month with no fuss. I always make a point of getting the September kit. It is usually something Halloween related and is often a treat holder. This month's kit did not disappoint. It was a kit for Halloween crackers - you know like Christmas crackers but Halloween themed. 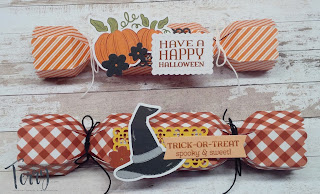 I have made up two of the crackers so far so I could share here what they look like. I will be putting the rest of them together but I want to get the treats to put inside of them first so I don't have to take them all apart to stick in the goodies. I think I will give them to my grandchildren and maybe they will be allowed to pass them out at their school. There are so many left over items in this kit that you could make a ton of cards, treat boxes or whatever else you can think of.

I also made a couple of Halloween cards using some of the items in this month's kit. This first one is for my granddaughter Paisley. She loves cats and is hoping to have one of her own. 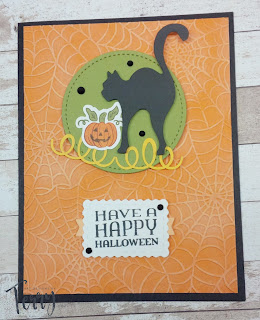 I started with a Basic Black card base. On top of this I added a piece of Pumpkin Pie cardstock that I embossed with the Cobwebs 3D Embossing Folder. I used a sponge to add some Whisper White Craft ink on top of the cobwebs so they pop out a little more. I cut out a stitched circle from some Old Olive cardstock and added it to my card front using dimensionals. This is what I added my pieces from the Paper Pumpkin kit to. I added  a small pumpkin that I stamped a jack-o-lantern face onto using Tuxedo Black memento ink and some yellow swirls using Tombo multipurpose adhesive and then I added the black cat using dimensionals. I also added on some Basic Black rhinestones which are sadly retired but this girl loves some bling and these rhinestones were just what we needed. The piece that I stamped the sentiment on was in the kit as well as the banner piece that I attached behind it. I used Tuxedo Black Memento ink to stamp the sentiment and I popped this piece up using dimensionals. Again I had to add a couple of the Basic Black rhinestones.

The card I made for Everett is very similar to Paisley's. As they are twins, they like things to be similar but a little different. 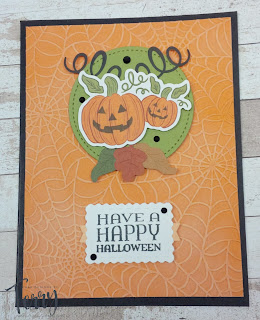 I used basically the same things as I used on Paisley's card except I used the double pumpkins instead of the cat. I also added black swirls and some of the autumn coloured leaves. I had to add some of the Basic Black rhinestones to his card too. A few months ago I sent them both cards as I often do and he was a little upset that Paisley's card had more "sparkles" on it than his did. It was cards from a paper pumpkin kit that I was catching up on and it was the donut cards. The card I sent to Paisley must have had more bling than his but he noticed it and was not happy about it. Since then, I have been very careful to make sure that if their cards are similar, they have the same amount of bling.

What I used for today's cards:

Thanks so much for stopping by today. I hope you enjoyed the projects and the cards. If you are trying to figure out how to be creative during this time of limited group activities, you might consider signing up for Paper Pumpkin. It comes to your door once a month and gives you lots of creating ideas and all of the items needed to make your projects. It is always a surprise but sometimes we get little hints about what will be i the kit. I know for a fact that next month will be Christmas cards!