Hello my friends! As you may have read earlier, March is my blog's anniversary month. I am going to have some give aways to celebrate. There will be a give away on my actual anniversary day which is March 20th but I will also be having random give aways during the month. I mentioned in my last post that there will be a prize for the person that comments the most during the month. I will wait until April 2nd to tally up the number of comments during the month so everyone has a chance to get their final comments in. You MUST comment on a March blog post to be entered, an email comment does not count. I hope there will be lots of comments which means lots of entries!

So on to today's card. Actually, there are 2 cards today. A couple of weeks ago, I started working on February's Paper Pumpkin kit. I made three cards (one of each design) as the instructions were written. I knew right away that I was going to make the rest of the cards into some alternatives. All supplies were from the February Paper Pumpkin kit, Bouquet of Hope. I will list any extra supplies that I used at the end of the post.

Here are the original cards made as per the instructions in the kit: 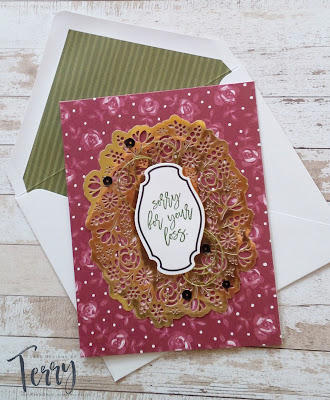 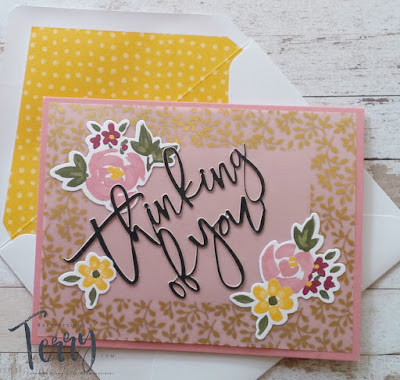 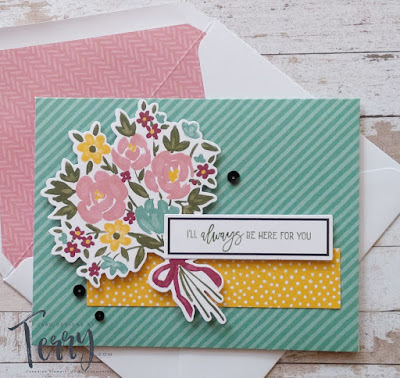 Here is my first alternative: 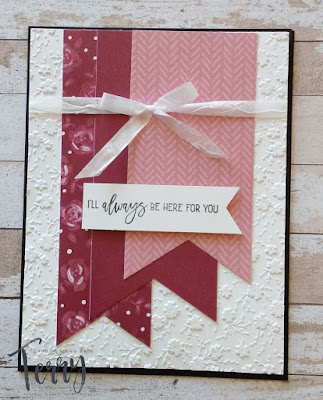 I started by cutting up the Merry Merlot card base that was in the kit. I cut the front (floral) and back (solid) pieces into strips. I also cut the pink envelope into strips. I used the Triple Banner punch to cut a flag edge into the bottom of each of the strips.

I used a piece of Basic White cardstock which I embossed using the Ornate Floral 3D embossing folder. I attached the strips of cardstock and envelope to this piece using Tombo Multipurpose glue. I like to use this for my adhesive especially when I am working with something that is embossed. I wrapped a piece of Whisper White Crinkled Seam Binding ribbon around this piece and tied it into a bow. I attached this to a Basic Black card base using dimensionals.

I stamped my sentiment from the kit on to a piece of Basic White cardstock using Tuxedo Black Memento ink. I cut a flag edge into the right edge so it would match the other strips.

What I used for Alternative #1:

Here is my second alternative: 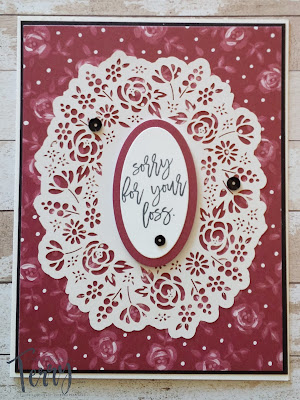 I started with a Basic White Thick card base. On top of that I added a piece of Basic Black cardstock. On top of the black cardstock, I layered a piece of the Merry Merlot floral cardstock that was supposed to be a card base. I then added the oval shaped doily. In the kit it was intended to be used with the gold foil side facing up. I preferred the white side so that is what I used.

I stamped the sentiment from the kit using Tuxedo Black Memento ink onto a piece of Basic White cardstock. I cut it out using the Layering Ovals die set. I also cut out the next size up oval from the solid Merry Merlot side of the card base. I adhered these two ovals together and attached them to the center of the doily using dimensionals.

I then added a few of the black sequins from the kit and that is my second alternative.

What I used for Alternative #2:

Thanks so much for stopping by today. I hope you liked these alternatives. I will post the other alternatives later this week. Which one of these alternatives do you like better, #1 or #2? Comment on this post to let me know and get your name into the draw to win a prize!