Hello my friends! As I said in my last post, I took part in a Stampin' Business Expo and Creative Party this past weekend. It was a full day of business tips, card making and card challenges. It was so much fun but lots of learning as well. The stamp bundle we worked with for the cards we made was Plentiful Plants. This is another stamp set that I overlooked in the catalogue. Now that I have had a chance to play with it, I have definitely changed my mind about it. It is very versatile and fun. Apparently macrame is all the rage again. I was at a craft fair last weekend and there was a booth with just macrame plant hangers, wall hangings and other decorations. Takes me back to the 70's when I first started making plant hangers....

Here are the three cards we made during the training day. These designs were not mine. I give full credit to Allison Okamitsu for creating these beautiful cards and sharing them with all of us. 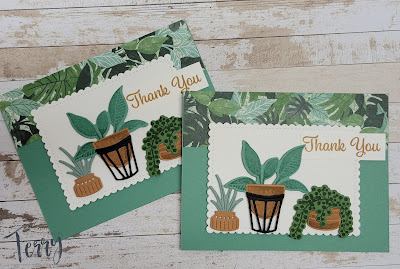 This card uses a Just Jade card base. We added a strip of designer paper from the Bloom Where You're Planted DSP pack along the top edge. We then added a Basic White scalloped rectangle from the Stitched so Sweetly Dies set. We added it to the card base using dimensionals. On another small piece of Basic White cardstock, we stamped the sentiment using Cinnamon Cider ink. We added this to the upper corner of the scalloped rectangle using a dimensional on the right edge and adhesive on the left edge.

The ivy plant is placed in a plant stand that was cut out using the die from the bundle and Basic Black cardstock.

The plants were all attached into their respective pots using Tombo multipurpose adhesive and were attached to the scalloped rectangle using dimensionals. 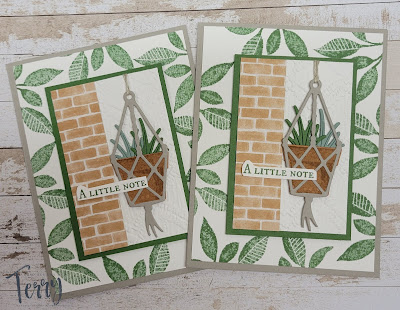 I think this one is my favourite of the three although I love them all. We started by stamping one of the leaf stamps onto a piece of Basic White cardstock using Garden Green ink. We stamped the image all around the outer edge of the cardstock. We attached this piece to a Gray Granite card base using regular adhesive.

The smaller piece of Basic White cardstock was embossed using the Macrame 3D Embossing Folder. We added a strip of designer paper from the Bloom Where You're Planted DSP pack to the left edge of the embossed cardstock. Then we matted this onto a piece of Garden Green cardstock.

We stamped the sentiment using Garden Green ink on a small piece of Basic White cardstock. We cut around the words and then attached it to the card using dimensionals and adhesive where it attached to the plant pot. 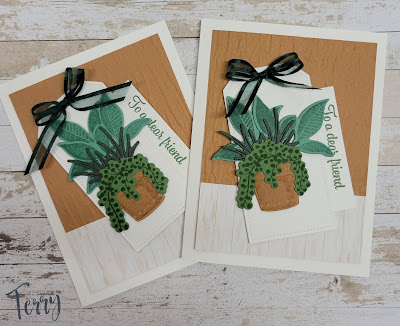 To start this card, we added a strip of designer paper from the Bloom Where You're Planted DSP pack to the bottom of a piece of Cinnamon Cider cardstock that had been embossed using the Bark 3D embossing folder. We attached this to a Basic White Thick card base using Tombo multipurpose glue.

We attached all of the plants to the plant pot using Tombo multipurpose glue and then added the finished plant to the tag using dimensionals.

We tied a bow using the Evening Evergreen Open Weave ribbon and attached it to where the hole in the tag is using a glue dot.

What was used for today's cards:

Bloom Where You're Planted DSP

Thanks so much for stopping by today. I hope you enjoyed these cards. It was a lot of fun making them and the entire day was great. Which of the three cards is your favourite? This is another stamp set that I missed originally in the catalogue but it is a great set. Did you make macrame plant hangers back in the 70's too? I know I am dating myself but hopefully I am not alone in this trend....