Hello my friends! I hope you are all staying cool in this hot weather. We went to the lake again for the weekend. Doug took the Friday off so we could make it a long weekend. Our youngest daughter and her husband joined us out there for the weekend as well. It was great having them there. We went golfing at the small course on Saturday morning and then on Sunday morning we went for a hike to the waterfalls. We wanted to get out there early before it got too hot. Then we spent the afternoons at the beach. The lake itself is actually pretty warm. I don't usually get in until late July or August but I was in the lake at the end of June this year!

Here is a picture of my daughter and I at the golf course. This was at about 10:00 am and it was already over 30 degrees. I know I am not wearing proper golfing attire but this course doesn't really follow the rules. 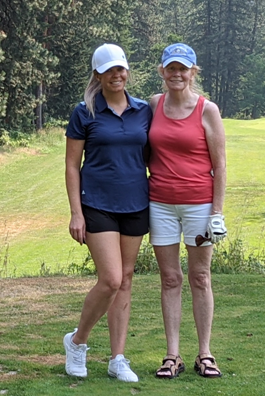 So on to today's card. My amazing friend Susanne held a Mystery Card event last week which I took part in. It was so much fun! She sent us the dimensions of cardstock and DSP to cut and we made the card along with her during her live video. We had no idea what the finished card was supposed to look like until we were done. What a great idea! I might have to give that a try too. I used the Pansy Petals DSP for my card. This is one of the packages of DSP that is on sale this month for 15% off. Such a great deal! 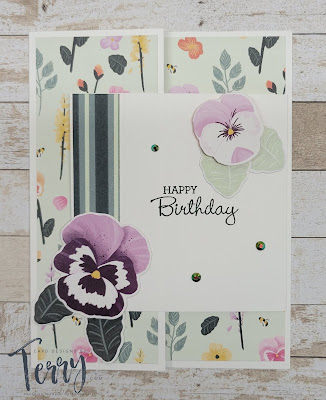 Here is a picture of the card opened: 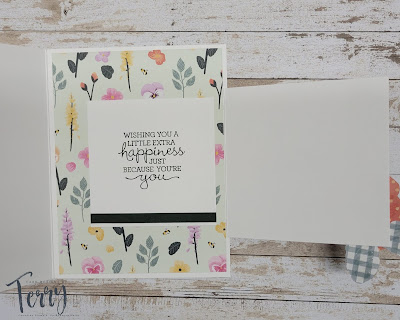 I started with a piece of Basic White Thick cardstock for my card base. On the card front, I trimmed off 2 inches from the right edge to make the flap that folds over 2.25 inches wide. I stamped my sentiment on the larger of the pieces of Basic White cardstock using Evening Evergreen ink. I scored it at a quarter of an inch along the right edge of this piece of cardstock and folded it over and burnished it well with my bone folder. I attached this cardstock to the back of the larger piece of DSP so that the small flap was under the DSP.  I then attached the DSP to the inside of my card.

I stamped the second sentiment to the smaller piece of Basic White cardstock using Evening Evergreen ink. Both sentiments I used were from the Pansy Patch stamp set which is part of the bundle. I attached a small strip of Evening Evergreen cardstock to the bottom of my white cardstock. I then attached this piece to the inside of my card so that it was centered under the top flap. I did this by adding my adhesive to the back of the cardstock and then I laid it down, top side down, on the center of the top flap. Then I folded the card over so the cardstock was stuck down perfectly in the right spot.

I then attached the smaller piece of DSP to the card front. I then decorated the front flap. I added a strip of striped DSP to the left edge of the flap. This is the reverse side of the DSP that I used on the rest of this card. I used two other pieces of DSP from this package and cut out my pansies and leaves using the Pansy Dies which are part of this bundle. I attached the smaller pansy in the top corner using dimensionals. I added the smaller, Soft Succulent leaves using adhesive. I attached the Evening Evergreen leaves to the back of the larger pansy using Tombo Multipurpose glue. I then added Tombo glue to the entire back of the pansy and leaves. I stuck down the pansy and leaves to the lower corner of the flap. The portion of the pansy and leaves that did not stick to the flap still had Tombo glue on it so I was careful to make sure it didn't stick to the card front. I let the glue dry completely and this now becomes a repositionable adhesive. Once the glue is totally clear, it is dry. It only takes about 10 minutes depending on how thick your glue is.

To finish off the card, I added some Evening Evergreen rhinestones from the 2021-2023 In Color Jewels to the front flap. This was such a fun activity! Thank you Susanne, so much fun and a fabulous card!

Thank you so much for stopping by today. I hope you enjoyed the card. Would you be interested if I held a Mystery Card class? Let me know and we can make it happen. I hope you are all staying cool in this heat.