Halloween Cards for the Grands

Hello my friends! I can't believe that it is almost Halloween. I was talking to my grandchildren the other day and they still hadn't decided what they want to dress up as. They have lots of great ideas but they keep changing their minds. Hopefully they can settle on something in time for their Mom to find them a costume.

Today I will be sharing the Halloween cards I made for them. The cards are almost the same with just a couple of colours switched out. 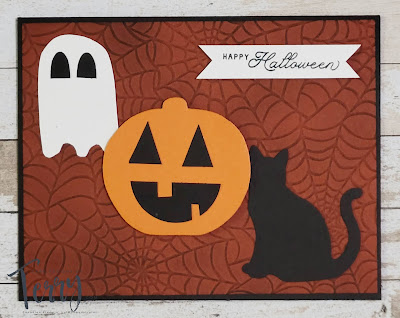 And here is Everett's card: 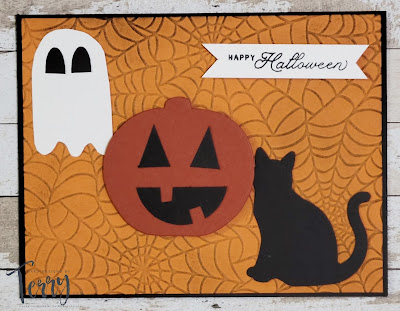 For both cards I started with a card base of Basic Black. I then added a piece of Pumpkin Pie cardstock for Everett's card and a piece of Cajun Craze cardstock for Paisley's card. I embossed both pieces with the Cobwebs 3D Embossing Folder. Unfortunately this folder retired last year. I don't like to use retired products because it isn't fair for you if you see it and want it but can't get it. I had to use this folder though for these cards. Once I embossed the cardstock pieces, I used a sponge dauber and Tuxedo Black Memento ink to sponge on some colour on the raised parts of cardstock. The spider webs pop so much more with the ink sponged on them.

I used the Cat Punch to cut out the cat from some Basic Black cardstock. I attached the cat to the card front using Multipurpose adhesive.

To make the ghost, I just drew a ghost shape on a piece of Basic White cardstock and cut it out using my paper snips. I made the eyes by punching out a daisy using the Daisy punch and Basic Black cardstock. I only punched out the edges of the petals and then trimmed them using scissors. I attached the eyes to the ghost and the ghost to the card front using Multipurpose adhesive.

I used the Detailed Pumpkin Dies to cut out the pumpkins. I used Pumpkin Pie cardstock for Paisley's pumpkin and Cajun Craze cardstock for Everett's pumpkin. I used some Basic Black cardstock to cut out the faces that I added to the pumpkins to turn them into jack-o-lanterns. For the eyes, I cut a small rectangle using my paper trimmer. I marked the center at the top of the rectangle and used my paper snips to trim off the edges to create the triangles. I used the Layering Circle Dies to make the smile. I cut out a circle from Basic Black cardstock and then cut it in half. I used my paper snips again to cut out the spaces where the teeth are. I attached the eyes and mouth to the pumpkin using multipurpose adhesive. I attached the jack-o-lantern to the card front using dimensionals.

I stamped my sentiment using Tuxedo Black Memento ink on a strip of Basic White cardstock. The sentiment is from the September 2021 Paper Pumpkin. I used my paper snips to cut a banner into both edges of the sentiment strip. I added it to my card front using dimensionals.

What I used for today's cards:

Thank you so much for stopping by today. I hope you enjoyed these cards. I am pretty sure that Everett and Paisley will love them. Before I had grandchildren, I didn't really make Halloween cards. Now, they are the only ones that I send Halloween cards to. Next year, I will have another one to make and I am very excited about that! Do you send Halloween cards?