Hello friends! I hope you all had a very Merry Christmas! We had a great time at my younger daughter's. I brought all of the food up there to cook as she is 38 weeks pregnant and wasn't up to doing the big meal. Her husband's parents came as well as my mother-in-law. It was quite the feat for the boys to get her into the house in her wheelchair but they did it. She was so happy to be there that she didn't want to go back to her home. She is happy at the home but this was the first time she had been out since moving in there.

I thought I would share one of my favourite cards that I made for Christmas this year. I love all of the cards I created but there are a couple that just stand out as my favourites. 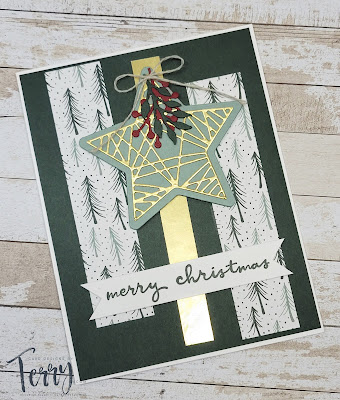 I used the Christmas Trimmings Dies to cut out a solid star from some Soft Succulent cardstock. On top of that I added a detailed star that I cut out from a Gold Foil Sheet with an Adhesive Sheet attached to the back of it. That made sticking the star to the solid star so much easier! On top of the detailed star I added a sprig of berries that I cut out of Cherry Cobbler cardstock and a leafy sprig that I cut out of Evening Evergreen cardstock. I then added the star to my card front using dimensionals. I used some Linen Thread to tie a bow and attached that to the top of my star using a glue dot.

I stamped my sentiment from the Christmas to Remember stamp set using Evening Evergreen ink on a strip of Basic White cardstock. I used my scissors to cut a banner cut into both edges of the sentiment strip. I attached this piece to my card front using dimensionals.

Thank you so much for stopping by today. I hope you enjoyed this card. I think my cards all made it to their destinations on time. I know that many people received them on Christmas Eve. That took almost 3 weeks to go from Kelowna to Kelowna! I know that our mail goes to Richmond to be sorted so they probably hung out their for a couple of weeks. I received a big stack of cards on Christmas Eve as well. They were probably hanging out in Richmond with my stack of cards!