Thank You Card by Chelsey

Hello friends! So the fog has lifted from Kelowna but unfortunately we got more snow last night. Up here on the mountain we got about 6 inches but it was less in town. I hope that is the end of it but I know it probably isn't.....

Today's card was totally designed by my daughter Chelsey. I am so proud of what she came up with! She is so very creative. This card was made after her surprise baby shower. She wanted to make her own homemade thankyou cards to give to everyone so the weekend after the shower she came over and went through everything in my craft room. She loves sparkle and shine as you can see with this card. Unfortunately, she chose some items that are retired but it's just so cute I had to share it anyway. 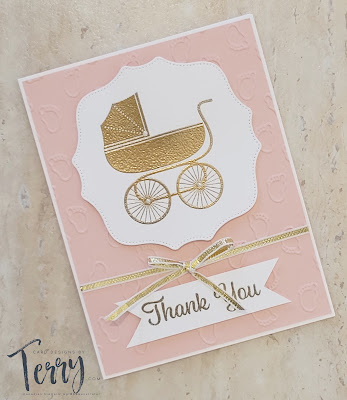 She started with a piece of Basic White cardstock. On this she stamped the carriage from the Something for Baby stamp set (which is retired) using Versamark ink. On top of that she added Gold Embossing Powder (from the Metallics Embossing Powder Set) and heated it to melt using the Heat Tool. Once it had cooled, she cut it out using a die from the Hippo & Friends Dies set. On another strip of Basic White cardstock she stamped the sentiment from the Plentiful Plants Stamp set using Versamark. She added Gold Embossing Powder and heated it to melt. She cut the banner cut into both ends of the strip.

She found an embossing folder in my drawer of embossing folders that I have no idea where it came from. It has been in there for a long time. I know it is not a Stampin' Up! product but she wanted to use it anyways because it is so cute. She used this adorable folder on a piece of Blushing Bride cardstock.

She chose some retired gold ribbon to wrap around the Blushing Bride cardstock and tied that into a bow. She then attached the Blushing Bride cardstock to a Basic White Thick card base using Tombo Multipurpose glue. She added the carriage image to the top part of the card front using dimensionals and added the sentiment to the lower part of the card using dimensionals.

To complete the card, she added some Pearl Basic Jewels to the wheels and the part where the cover connects to the carriage.

What was used for today's card:

Something for Baby Stamp

Thanks so much for stopping by today. I hope you enjoyed this card. I am really proud of what my daughter created. This was all her creation and I am so proud of her for this.