Hello friends! I hope you are all staying dry with all of the flooding we are seeing here. We are fine up here. There are underground streams all over Black Mountain but so far we are doing great.

Today's card is another one of Susanne's creation for the Crafting at the Lake Event. This is such a beautiful card using the Waves of Inspiration Bundle. 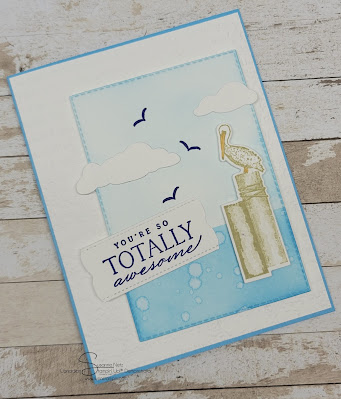 I started with a piece of Basic White cardstock that I cut out using a die from the Stitched Rectangles Set. I attached this to a piece of grid paper using a strip of Masking Paper. I used a Blending Brush to add Tahitian Tide ink to the bottom third of the cardstock. I removed the Masking Paper and added more Tahitian Tide ink to the top two thirds of the cardstock. I added lighter ink at the top so the lower portion would appear like the ocean. Using the Masking Paper created a distinct horizon line. I used the straw from the Stampin' Spritzer bottle to added some water droplets to the ocean. I set this aside to dry while I worked on the rest of the card.

On a Tahitian Tide card base, I added a piece of Basic White cardstock that I embossed using the Timeworn Type 3D Embossing Folder.

On another piece of Basic White cardstock, I stamped the image of the pelican sitting on a piling using Crumb Cake ink. I cut it out using the corresponding die from the Bundle. I used a Pale Papaya Stampin' Blends to colour the pelican's beak and legs.

Thanks so much for stopping by today. I hope you enjoyed the card. I think it is gorgeous!