Hello friends! Thank goodness the hot weather has returned. It was really cool on the weekend. I was watching my granddaughter Saturday night so I had a late night and it was definitely cold driving home. I had to turn the heat on in the car. So glad it was just a short blip and summer has returned.

Today's card was made as a mystery card for a meeting I attended on Zoom. We were given the dimensions of the cardstock and DSP and we came up with a card from that. This is a fun fold that I don't think I've done before. 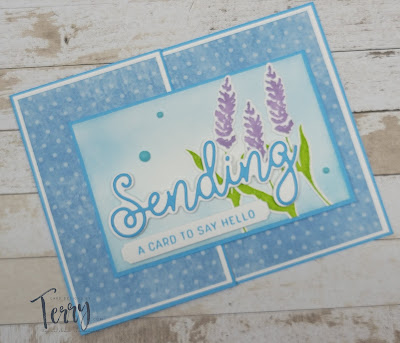 I matted two pieces of DSP from the Tea Boutique DSP pack with Basic White cardstock and added them to the card front and the inside of the card.

On a piece of Basic White cardstock, I stamped the lavender looking flowers using Highland Heather ink. I also stamped the stems using Granny Apple Green ink. I used the corresponding dies from the bundle to cut these out.

On another piece of Basic White cardstock, I used my Blending Brush to add some Tahitian Tide ink all around the edges so the cardstock wasn't totally white. I added my flowers to this cardstock. I matted this with the Tahitian Tide cardstock that I cut off from the card front. I then attached the left edge to the front of the card.

I cut my "sending" sentiment out of a piece of Tahitian Tide cardstock with an adhesive sheet attached to the back of it. I matted this on the solid "sending" that I die cut from a piece of Basic White cardstock. I added this to the piece with the flowers using dimensionals.

I stamped the second part of the sentiment on a piece of Basic White cardstock using Tahitian Tide ink and cut it out using the label die in the bundle. I added this below the "sending" using dimensionals. To complete the card, I added some Tahitian Tide dots from the 2022-2024 In Color Dots package.

I'm really pleased with how this card turned out. When you cut out the cardstock and DSP you have no idea what you will end up with.

Thanks so much for stopping by today. I hope you enjoy this card.